On July 6, Dane County, Wisconsin became the 26th agency in the U.S. –and the first in the Badger State–to go live with the ASAP program. Dane County 9-1-1 Center Operations Manager Paul Logan took some time to review the ASAP implementation, which included being the first PSAP to use TriTech’s Inform CAD with an ASAP interface solution and also working with the state Justice Department which manages the state switch.

Asked why Dane County implemented ASAP, Paul said, “We’d been interested in ASAP for a long time, thinking it could have a significant positive impact on our operations. Every PSAP is looking for ways to improve answer times, and decrease the likelihood of errors, and ASAP seems to fit into both of those areas. We decided at budget time a few years ago to ask for the money to buy an interface and get the project rolling.

“Overall, the process has been painless,” he continued. “We worked with our CAD vendor (Tri-Tech) on the interface. It was a learning experience for everyone since we were the first customer to make the request. We’re excited to help make it right for those Tri-Tech customers who will follow. Having [ASAP Subject Matter Expert] Bill Hobgood involved was key to making it happen. Bill obviously has the answers to the tough questions.

“We also worked closely with our state Department of Justice who manages the message switch. Internally, our technical staff worked with all our ASAP partners to make sure it would work, and we’re happy that we finally are live.”

While Logan says that it’s a bit early to say how ASAP is impacting operations, he adds that with ADT, Tyco and other companies coming online soon, he expects to see an impact. “I’m really looking forward to being able to says it’s been a huge dial mover for us,” he concluded.

e’ll check back with Paul Logan in a few months to report on Dane County developments.

For the past 24 months, TMA has been acting on the findings of its 2015 “Voice of the Customer (VoC)” initiative. This is the report on actions taken to address issues identified as critical during the VoC.

Coming in September — Your chance to weigh in, again or for the first time, on the direction YOU want to see your association take in the future!

In 2015, TMA (then CSAA) launched the “Voice of the Customer” (VoC) initiative to lay the foundation for the future direction of the Association. The initiative included surveys, conference calls, and in-person focus groups, in which TMA asked members to discuss the issues and actions they believed the Association needed to address to remain relevant and vital going forward.

One of the areas that rose to the top of the importance list was marketing and messaging. Members questioned whether the term “central station” was understood by the general public, and whether the Association needed to revisit its mission and membership structure in order to widen its scope of influence and strengthen its volunteer base.

Association committee members and staff took these findings and began collaborating on how best to address the concerns of the members. The resulting proposals were presented in spring 2016 for consideration at the General Membership Meeting held in June in Fort Worth.

“Our members sharing their insight was the driving force for TMA to research and implement these monumental actions,” said Association president Pam Petrow. “The name change, new mission, and expanded membership categories were the direct result of leadership listening to what our members told us during the VoC process.”

Across all sectors, members raised their concerns about alarm industry technology and standards.

Members felt that there was a critical need to keep abreast of technology developments, and suggested that the Association assist with providing more opportunities for user group training from associate members. In response, in May 2016, TMA launched a new Technology Committee. “The Technology Committee will be a resource for regular members to learn about technologies that impact their businesses, and a conduit for associate members to provide early awareness of technologically-innovative new products and services,” said Executive Director Jay Hauhn in Dispatch. The committee has since presented a series of “Tech Talk” webinars in coordination with TMA associate member companies on topics such as SD-WAN, Next Generation Firewalls, and Cybersecurity issues (available to members at no charge and archived on the TMA website). It has also worked closely with the Education Committee on the programs at ESX, the Annual Meeting, and Fall Ops to present cutting-edge technology sessions at these TMA events.

Promoting and adhering to standards are one way for an industry to demonstrate its quality and commitment to excellence to partners and the public. In the standards arena, members reported that while they thought TMA was doing a good job managing the standards process, there was not enough communication about activities and member resources. Subsequently the Standards committee, and its activities under retiring chair Lou Fiore and then-new chair Steve Shapiro, was spotlighted with a cover story in the Spring 2016 Dispatch. As the committee works to advance TMA, UL, and NFPA standards, as well as a remote station standard inherited from ESA, its members are committed to providing regular updates to be shared with the membership.

Many of the initiatives of the Association are planned and coordinated by our various committees. VoC participants asked TMA to review committee practices and communications to encourage engagement and action. After this process, TMA took the following actions:

During the conversations, members made it clear that public sector engagement remains a priority and in fact, sets our association apart from others in the industry. Members felt that outreach efforts are important and that how the monitoring industry engages with first responder associations impacts many of TMA’s initiatives. Here are some of the actions we’ve taken to support this priority:

It was no surprise that growing membership and providing value to members topped the list of priorities. Here are some of the actions that committees and staff have taken to support the VoC directives:

The topic of education, one of the most valuable benefits provided by any association, provoked a number of comments and discussions across all sectors. Since the VoC launch, TMA staff and committees have taken the following actions in response to members’ input:

TMA members, watch your email for the “VoC 2.0” survey in September!
Questions or comments? Contact communications@tma.us.

26! Dane County, WI: Wisconsin became the eighth state to open the state message switch to accommodate ASAP traffic with the Dane County 9-1-1 PSAP being the first in Wisconsin and 26th agency in the United States to launch the program. The go-live on July 6 also introduced TriTech’s Inform CAD with an ASAP interface solution.

The Automated Secure Alarm Protocol (ASAP), which was launched in 2011 as a public-private partnership, designed to increase the efficiency and reliability of emergency electronic signals from central station alarm companies to PSAPs. ASAP utilizes ANSI standard protocols developed cooperatively by the Association of Public-Safety Communications Officials (APCO) and CSAA. With ASAP, critical life safety signals and accurate information is processed in seconds, not minutes, through the Nlets system of state-to-state PSAP communication, insuring that complete and accurate information is transmitted to the PSAP every time.

For more information on ASAP or to access ASAP resources (videos, webinars, training and outreach materials), contact asap@tma.us or 703-242-4670, or visit tma.us/asap.

At this week’s APCO 2017 conference in Denver, The Monitoring Association (TMA) presented two opportunities for PSAPs to learn about ASAP’s winning formula for error reduction, cost containment and faster res

Dozens of PSAP representatives stopped at the TMA booth in the exhibit hall to discuss with TMA staff how the technology works and how it can be implemented.

About 75 conference registrants attended the special session “ASAP to the PSAP: A Win-Win for Public Safety and the Alarm Industry” on August 13. Subject matter expert Bill Hobgood, TMA Executive Director Jay Hauhn, and representatives from PSAPs in New York, Arizona and Washington, DC discussed how the program reduces 9-1-1 processing and response times to alarm events while eliminating telephone calls and miscommunication errors between monitoring centers and PSAPs.

ASAP progress and outreach efforts are seeing results. “What was different from our past appearances at APCO was that this year, there was a significant increase in PSAP personnel who had already heard about ASAP and had already taken steps to educate local decision-makers about its value,” said Hauhn. “We even had a number of PSAPs from states where ASAP is not yet implemented mention to us that they hoped to be the first in their state to do so!” 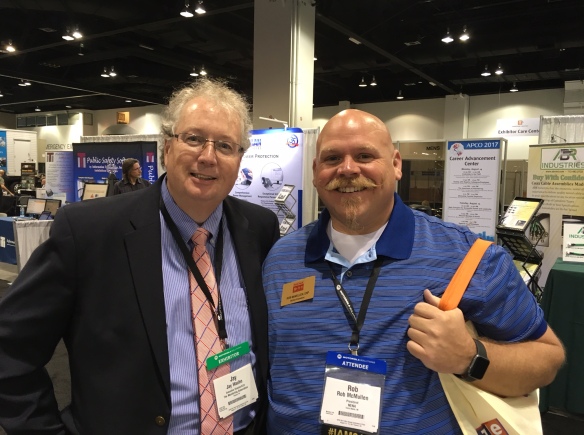 In July, TMA Vice President of Membership and Programs Celia Besore attended the ALAS Management Summit, the annual event of ALAS, the Latin American Security Association. The summit focuses on the executives and decision makers of Latin America’s most prominent security companies. 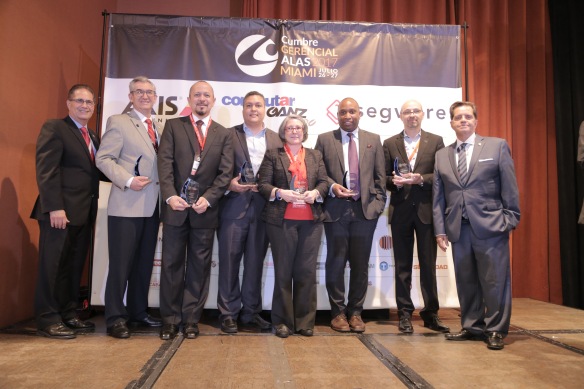 At the summit, ALAS celebrated its 20th anniversary and presented TMA, along with other industry partners, with commemorative gifts. TMA’s was inscribed: “On our 20th anniversary we would like to thank The Monitoring Association for being a valuable partner in our history.”

TMA congratulates ALAS on its 20th anniversary! Watch the video for a recap of the Summit.

TMA is saddened to note the passing of Michael Arthur Bonifas, the grandson of TMA past president Bob Bonifas and nephew of TMA past president Ed Bonifas. Michael was born on August 30, 1993 in Aurora, IL to Dale and Jeanette Bonifas.  He died suddenly from a tragic fall on August 4, 2017 at the age of 23.  Michael graduated from Batavia High School in 2011. He graduated from the University of Kansas with a marketing degree in 2015.  He was employed as an account executive by FleishmanHillard in Chicago. Michael was an avid lover of the outdoors where he pursued his passions jncluding hiking, hunting, snowboarding, ice fishing. In lieu of flowers, the family wishes to honor his love of the outdoors with donations made to The Appalachian Trail Conservancy and specifying contributions in memory of Michael Bonifas.

In areas where it is used, ASAP delivers alarm notification information from central stations directly to public safety answering points (PSAPs) via computer rather than by phone, eliminating the need for communication between monitoring center operators and 911 operators.

ASAP was created in partnership with The Monitoring Association (formerly the Central Station Alarm Association) and the Association of Public Safety Communications Officials (APCO). Vector Security was the first alarm company to use ASAP in the City of Richmond, VA in 2012. Vector Security assisted with implementation in Newport News by helping to perform extensive testing prior to the system going live.

“Alarm users in Newport News, including several hundred Vector Security customers, will benefit from faster and more accurate emergency response with the implementation of ASAP,” said Anita Ostrowski, Vice President of Central Station Services, Vector Security. “We hope the positive impact that ASAP will bring to Newport News will encourage other major 911 centers in the nation to adopt this technology as well.”

“As a security provider, we seek ways to promote ASAP’s value to municipalities and public agencies, and help other alarm companies implement it for the greater good of the industry and the safety of our communities,” she added.

In addition to Vector, the following alarm companies are now live with ASAP in Newport News: Rapid Response, Protection1, Vivint, Moni, Guardian, and Affiliated.  ADT will be going live next week.

Newport News is the fourth largest city in size in Virginia, with its boundaries encompassing 69 square miles. Within Virginia, Newport News joins the City of Richmond, James City County, York County, and Henrico County, which are already online with the use of ASAP technology.

For more information on the benefits and features of ASAP, visit www.tma.us/asap or www.vectorsecurity.com/asap.